Well it’s been one week since we got back from our first family holiday. I just had the argument with Thom that we have been back two weeks. It feels longer! But no it’s only been a week. It’s taken me a week to get back on track with the amount of washing. It was bad enough with just myself and Thom. Now with little Adeline’s clothes as well- one washing machine and no quick wash mode it’s taken forever! I did an Instagram about it and some genius messaged me to say they always take their clothes to the laundrette after a holiday, £20 for all your stuff to be washed. Why didn’t I think of that..next time!

I have wanted to blog sooner, but you know sometimes it takes you a while to find your mojo after holiday and the time to actually sit down and try and gather my thoughts. So here I am in the bath, gathering my thoughts and about to tell you about our experience abroad with a 10 month year old.

So our flight was 9am, pretty decent flight time which we obviously planned.

We got a text the night before from Jet2 saying we could do a twilight check in.. now you’re thinking what the heck is twilight check in. WELL basically the night before between 3-8pm you can take all of your luggage and check it all in. Well I was like YES this is amazing no having to stress in the morning, queue up or worry about the weighing of the cases. Come on we all get a little anxious when those cases go on the scales, even though I weigh them before I still get nervous! I think I’m scarred from when I went to Santorini, myself, Thom and our two best friends (pre baby) and our cases were over weight, they were going to charge us £250. I will never get over the shame and the looks from other people when we had to open our cases and empty our shoes, swim wear, you name it into carry bags- HAPPY HOLIDAYS!

Back to twilight check in.. genius idea! So Saturday night all our cases were gone. One less thing to have to worry about come Sunday morning and an extra hour in bed! We did the usual airport brekkie, I bought a book (wishful thinking I know) and I bought Adeline her lunch as I assumed the plane wouldn’t have anything suitable (which by the way it doesn’t, it really shocked me that Ella Kitchen or other baby food brands haven’t picked up on doing a baby plane lunch box) and Thom had a beer. We were ready to roll and SO excited. I actually wasn’t nervous, even though now I look back 5 hours was very ambitious for our first time flying with Adeline.

So we had a baby bag full of new toys and books. I had a lunch box full of snacks, a blanket for snoozing and the I pad as a last resort: it’s funny because I always said I wouldn’t be one of those parents who sticks an I pad in front of their child’s face to shut them up. Well guess what , if you haven’t got a child, don’t say such stupid throw away comments when you clearly have no idea…

When we got settled into our seats I had many people around us giving us ‘the look’, you know the look, once upon a time you probably did ‘the look’. I’m talking about that nervous smile to a passenger with a baby. That smile that says on the outside ‘aw what a lovely baby, so cute’ and on the inside it’s saying ‘your baby better not cry the whole flight and behave like an angel or I will be quietly angry inside.’ Well I think it surprised the whole plane when we were buckled in ready to go, Adeline on my lap- FAST ASLEEP! She fell asleep during the safety instructions.. what. a. legend. And for an hour she laid on me. She only woke up when when my in- flight meal came..obviously! Why do children always wake up when you’re about to eat. I mean these planes aren’t big enough anyway never mind a baby on lap, tray down, plane food, cuppa tea.. doesn’t really go does it. I look over to my right and what’s my husband doing. Chilling, reading his kindle and drinking a beer (he actually had 2 beers because apparently ‘it was on offer’). Honestly men!!

So the flight was all good. We stayed cool calm and collected. Played with her when she was awake, fed her lots of snacks and the 5 hours seemed to fly (quite literally).

The way home was a lot more difficult. It was a 5pm flight and it was tiring! She had her in flight meal (my in flight meal) and then she slept for two hours which was so uncomfortable, I couldn’t feel my bum and my arm had lost all feeling. She managed an hour on Thom and then an hour on me! Then the moron steward decided to use his microphone to announce sales in the duty free SO loud- might I add it woke Adeline and my Dad up! So then it was 3 hours of a very irritable, tired baby. She did do well to say we were still on Cyprus time and it was technically midnight. Someone even pointed out when leaving the plane ‘ he’s a canny little thing’… HE…

Oh did I mention the I pad did come out on the flight home. Good ol’ In The Night Garden! Iggle piggle saved the fight!

What a laugh we had! When I told people we were going away with my parents we had some funny looks. Thing is my parents are legends, and a proper laugh. I love spending time with them and i love going away with them! So course we invited them to our first holiday and to celebrate my birthday (very early birthday). Plus an extra pair of hands with Adeline is always handy. 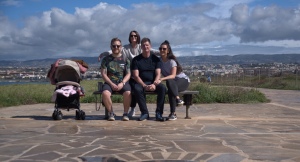 You soon get into your little holiday routine don’t you. Is it just us or when you go away you have the same table you eat brekkie & dinner at, the same sun lounger, we even sat at the same table to have cocktails and play cards with on an evening. God help you if you mixed it up and eat/play somewhere different. I actually think one evening meal one of the nice waiters tried to sit us somewhere else and my Dad looked mortified. He actually walked past him and went to our usual table where we ate brekkie and dinner at every night #britsabroad. We were really happy with our hotel it was gorgeous. Everywhere you looked it was instagram worthy. On the first day we spent it around the hotel, getting our bearings and enjoying the sun. In that moment I felt like the luckiest Mama alive. 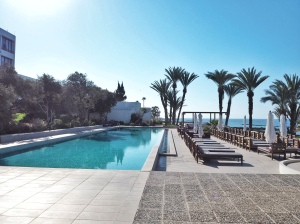 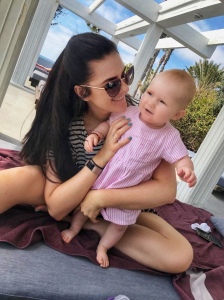 We had lots of other things planned for our holiday, it wasn’t all lounging around, obviously, when holidaying with my Husband you’re always sure to have an action packed holiday- which I’m not complaining about by the way. We hired a car which was a great idea because really there isn’t much around Pathos unless you travel. So we did! Thom had his itinerary and off we went each day. We went to Akamas Peninsula, Limassol and the Mountain villages. And lots of little coves and beaches. We kept busy for sure! 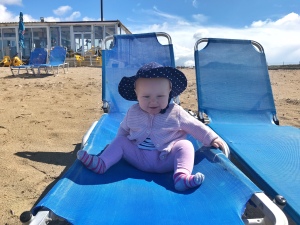 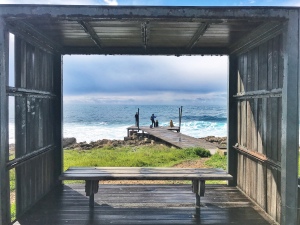 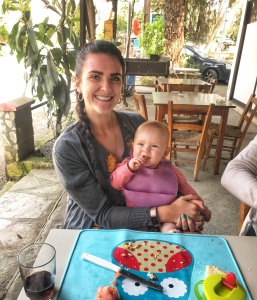 Adeline really was a legend I actually forgot about the formality of routine and just went with it. She slept a lot in the car so it worked well and she had naps in her pram as well. She even slept really well on a night. We had the odd 4am crying (i think she was confused about where she was) but then she was fine once we said shhhh. It’s like she remembered we were there and she was safe!

So I didn’t know how it was going to work. Were we going to have to go to bed when she did.. which is like 6pm? Surely not! We have to live a little don’t we! So i did what most parents do and I put her in her pram. And the legend slept whilst we had dinner, drank cocktails and played cards. We didn’t leave the hotel on an evening. The weather was similar to home on an evening. So it was dark early and quite cold. I didn’t really fancy taking Adeline out in that.

Top tip: buy a Snooze Shade. Not only is it good for keeping out the sun in the day but this is why I think she slept on an evening in her pram so well. We bought her a new stroller which she loved and the snooze shade blocked the light out and let her sleep in peace.

We also bought a Hush Machine which was invaluable as well. From amazon £34.99 seems expensive but we used it everyday. It blocks any other sound out and has different white noise settings. Worked for us!

The thought of coming home is always worse then being home. When you walk through your front door it’s always nice to be home! Probably because no one likes travelling back from holiday, it’s rubbish, it’s tiring and everyone’s coming back. You don’t see people having coming home beers in the airport do ya.. (apart from my husband apparently).

We got Adeline out of her smelly airport pjs and into some fresh pjs and straight to bed. Me and the hubby sorted all the washing into colours and put them into carrier bags- smashing idea from Thom. And we had a slice of toast and I was out for the count. In the morning it was back to our home life routine and it was like we had never left!

I feel like we were extremely lucky this holiday and Adeline generally is a chilled baby. She just wants love and attention (naps & food) and she’s happy. I do feel like if you’re chilled and go with it that helps as well. I’m pretty sure our next baby will be the devil because Adeline seems to fit perfectly into place wherever we go. I feel very lucky. 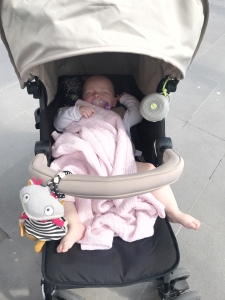 So we smashed the 5 hour flight, the holiday in general and I’m ready to go again!

Now… just the small issue of deciding where to go!